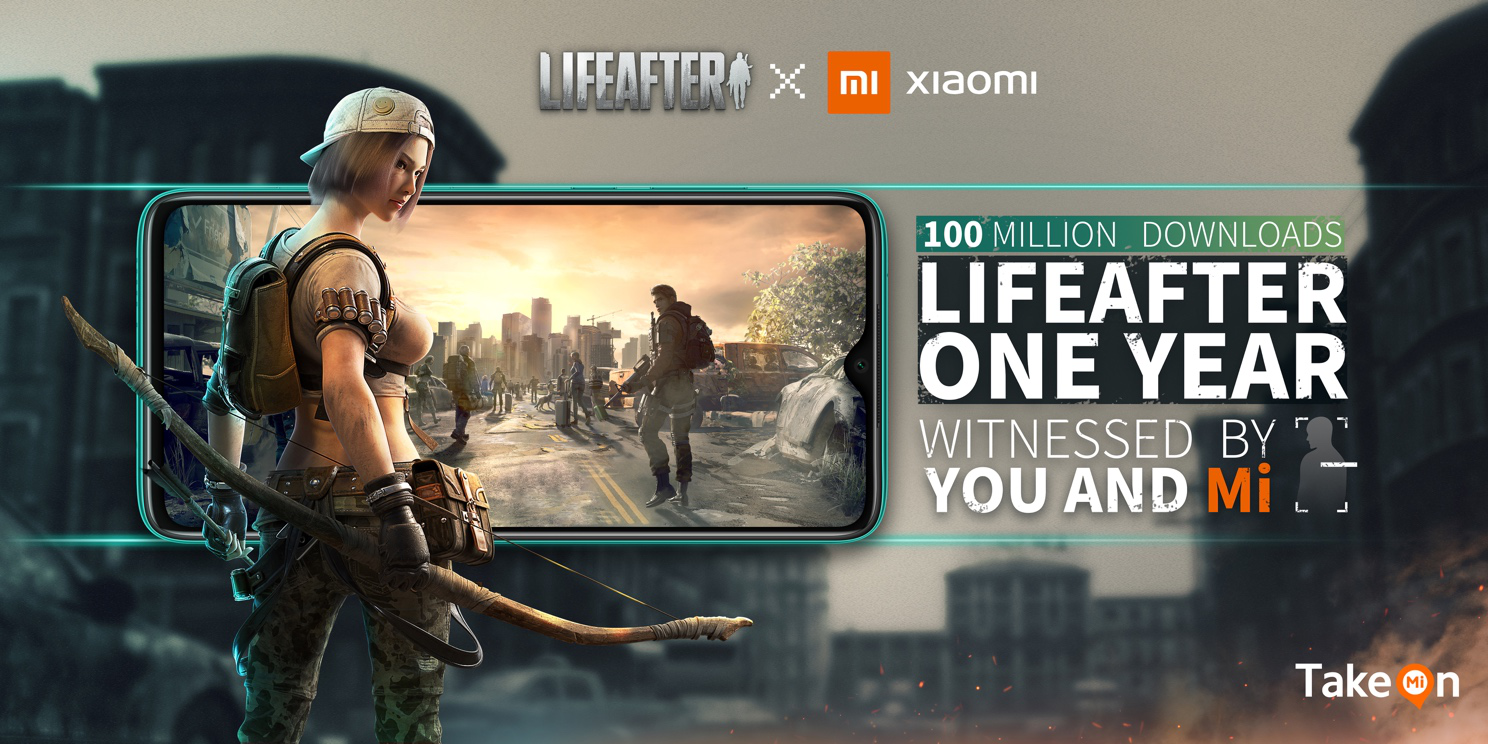 Be a real survivor at any of the theme stores and try your luck to win smartphones!

LifeAfter is a doomsday survival mobile game with comprehensive simulated gameplay that’sincredibly similar to real life. Players are set to face diversified survival scinerios with bad weather, aggressive monsters and scarce resources. As an ever improving and innovating game in the survival genre, LifeAfter was rated as the most competitive game in 2019 by Google Play. With over 100 million downloads, it has achieved popularity among young generations since its launch. As the partner of the LifeAfter anniversary celebration, Xiaomi is an Internet company committed to continuous innovation with increasing popularity among young people. The joint effort of immersive gaming expereince of LifeAfter and the outstanding smartphones performance of Xiaomi will undoubtedly bring local players an enjoyment beyond their imagination.

LifeAfter will be offering post-apocalyptic wastelands in over 100 Xiaomi physical stores. The stores feature LifeAfter-themed artwork and will also provide players with the latest version of LifeAfter for a demo play-through. Players can experience the struggles of post-apocalyptic survival, immerse in the beauty of the barren wastelands and the unyielding will to the survival of humanity!

On top of having fun experience, there will also be exciting anniversary lucky draws in all the stores. Scan the QR code in store to participate for a chance to win a total value of more than $5,000!

In the central business districts of Jakarta, Bangkok, and Kuala Lumpur, three of the Xiaomi flagship stores will be unveiled as LifeAfter pop-up theme stores. These stores will feature realistic on-site decoration and playtesting machines, transform into real “Doomsday Supply Centers”. Three “LifeAfter x TakeMiOn” play sessions will take place on March 7th and March 8th in Jakarta, March 28th in Bangkok and March 28th -29th in Kuala Lumpur in the three theme stores to celebrate the anniversary!

What’s more exciting is that, Miska University Raid Competition, one of the most popular raid among LifeAfter players will be held at the event! Players group up in teams of four and register online or on-site to participate in the speedrun challenge of Miska University Raid. Each participant will be rewarded with special gifts for registeration! The winning team will not only receive a bonus limited in-game package provided by LifeAfter, but also the latest smartphones and other products from Xiaomi! Before the start of the official competition, popular KOL players invited by LifeAfter will make a surprise appearance and give a warm-up demonstration match of Miska University Raid, accompanied by exciting live commentary from the MC to create an audiovisual feast!.

Since the launch of LifeAfter, players have grown together by chasing hope and light at this in-game postapocalyptic world. Thanks to the ever optimizing "Doomsday" experience and the extremely engaged player community, LifeAfter is able to jump across the barrier that separates online from offline. The collaboration between LifeAfter and Xiaomi, two brands deeply loved by young people in Southeast Asia, is bound to send a ripple of fun and excitement through their huge fanbases!

Follow the official social media accounts for the latest updates on the anniversary event:

LifeAfter is a mobile game depicting the survival of humanity in a post-apocalyptic world. Players need explore every inch of the post-apocalyptic world, living on with anything available, finding a place to camp and build a shelter, and encountering other survivors on your scavenging runs. Face it alone, or survive together ! As an innovation in the survival mobile game genre, LifeAfter has achieved more than 100 million downloads and was awarded as Google Play 2019 Most Competitive Game.

Xiaomi Corporation was founded in April 2010 and listed on the Main Board of the Hong Kong Stock Exchange on July 9, 2018 (1810.HK). Xiaomi is an internet company with smartphones and smart hardware connected by an IoT platform at its core.

With the vision of being friends with its users and being the “coolest company” in the hearts of its users, Xiaomi is committed to continuous innovation, with an unwavering focus on quality and efficiency. The company relentlessly builds amazing products with honest prices to let everyone in the world enjoy a better life through innovative technology.

Xiaomi is currently the world’s fourth-largest smartphone brand, and has established the world’s leading consumer IoT platform, with more than 213 million smart devices (excluding smartphones and laptops) connected to its platform. Currently, Xiaomi products are present in more than 90 countries and regions around the world and have a leading foothold in many of them.