Opening of the Dawn Celebration Event: Embrace the Diversity and Celebrate New Ships and Dynamic Liveries Are at Your Disposal
//www.neteasegames.com/news/game/20220824/30576_1038848.html Opening of the Dawn Celebration Event: Embrace the Diversity and Celebrate New Ships and Dynamic Liveries Are at Your Disposal

GUANGZHOU, CHINA, August 18th, 2022 - Sci-fi grand space simulation game Infinite Lagrange has turned to a new page and set off the Dawn Celebration now. The Dawn Accord, enabled by the Terran Sphere, has recently returned to the stage of history. To commemorate the birth of this Accord, all the signing parties referred to the signing date of the Accord as the "Signing Day of the Dawn Accord." They held a grand "Dawn Celebration" on that day to celebrate the efforts and contributions of all Explorers for the Lagrange Network throughout history.

As an event of great influence in the galaxy, Dawn Celebration attracts leaders of countless galactic factions and new Explorers. They will gather together every year for the event. A Celebration under the theme of "Lagrange of Diversity" is now ongoing in the City of Antontas. Explorers can now pre-register to connect to the Earth live stream and receive surprise rewards (official websites available in multiple languages).

In the Tower of Stars' conference hall in the City of Antontas, a daily forum is taking place under the theme "Lagrange of Diversity." Delegations from factions such as Antonios, Hayreddin Clan, Earth – Proxima Centauri, Thunderbolt Group, and NOMA Shipping will present keynote speeches and hold technology demonstrations in the forum. In their spare time at the conference, Explorers can visit the Tower of Stars freely to learn more about its glorious history. During the Dawn Celebration, each galactic faction will have its own Gallery after giving a speech to introduce the latest scientific and technological achievements and intelligence about newly publicized star systems. The Antonios Gallery is now open. The consortium has prepared a Dawn Celebration Fund Program and Premium Fund Program for all Explorers. Today, the Hayreddin Clan, as known as the pioneer in researching and manufacturing Aircraft, brings us the latest blueprint of the Hayreddin's Loyal - Pulsar Fighter. It adapts and carries on the legacy of Hayreddin Clan's design and aesthetic with an enhanced "Starchaser" Charged Pulse Cannon, which excels in both attacking and defending. Starting from September 7, Explorers can purchase the KCCPV2.0 - Light Aircraft Cruiser (TE), which has two groups of Hayreddin's Loyal - Pulsar Fighter (TE), from the Space Station Trading Post and experience their power and performance in real combat. 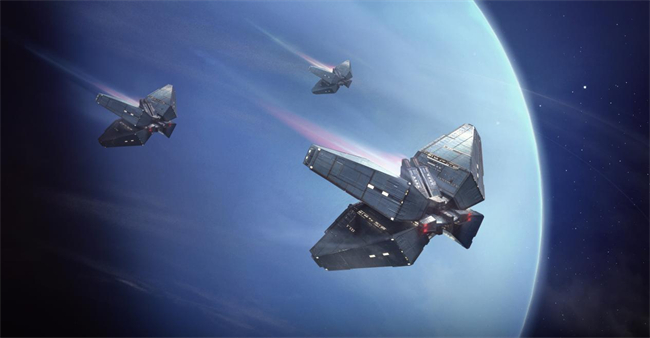 The Earth – Proxima Centauri Gallery starts at 12:00 on August 19. The faction of Terran Sphere will attend the event with its Eternal Storm "Splendor in Ocean" Premium Livery and "Tower of Stars" Dynamic Emblem. Splendor in Ocean utilizes the plasma curtain technology to create a flowing surface effect. It presents and delivers the innovative design of the Premium Livery.

Thunderbolt Group Gallery will be opened on August 20. By then, Thunderbolt Ship Modification Factory will transform and upgrade blueprints circulating in the market to tap into ships' potential and redesign them with extreme performance. NOMA Shipping Group, another ship manufacturer giant, is also set to announce something big. It will release Angulum Exploration Agreement in the near future to recruit Explorers to travel to this dangerous and mysterious Angulum Cluster together. In addition, it plans to release the gameplay preview of the Angulum Star System on August 21.

During the celebration period, Explorers who participate in the event will receive a special Plasma Cannon UAV, which can create a plasma color screen in the air and release plasma cannon projectiles at specific locations to celebrate the Dawn Celebration together. Completing the Cannon Salute and challenging missions will also get you commemorative rewards.

As the initiator of the Dawn Celebration, Antonios is hosting an exhibition under the theme "Antonios on the Way" in their Antonios History Museum. This is the first time Antonios has opened its history museum to the public. This museum has existed for thousands of years, and the archives there record everything that happened in the development of the Antonios star system. The Explorer Contact Center of the City of Antontas will officially open on August 17. Explorers can come here to reconnect with off-duty Explorers and invite them to return to the Lagrange Network. During the Dawn Celebration, the Contact Center will assess the behavior of returning Explorers and provide corresponding rewards to the Explorer who invited them. Moreover, the Contact Center will also present a Returnee's Star System Agreement to returning Explorers who had left to develop other star systems, which will provide them with supplies and rewards based on the developments they achieved in the other star system to help them develop in this star system after returning from their vacation. Dawn, a diversified and prosperous galactic network. All the Explorers shouldering the renaissance of human civilization in the universe are now gathered in the Dawn Celebration, sparking off collisions of thoughts through collaboration to enable a more remarkable and epic journey in the Lagrange Network yet to come. The Infinite Lagrange is now inviting all Explorers to embark on their journey into the universe. Join forces with the best to seize the star systems hidden in the shadows, and shed light on the unknowns.